I receive a lot of questions and comments regarding the overall safety of using Bluetooth Hearing Aids since they sit next to your head for 8-16 hours per day.

However, to determine if hearing aids are bad for your health, we must first understand what Bluetooth is.

Second, we need to understand what type of radiation that Bluetooth hearing aids emit.

1. Ionizing Radiation – This radiation is given by X-rays, Radon, and Cosmic Rays. Exposure to this type of radiation can be dangerous. X-rays for example, can increase your risk of cancer. Ionizing radiation carries enough energy to separate electrons from atoms which is extremely bad for your health.

2. Non-Ionizing Radiaiton – This radiation is given off by Wifi devices and Bluetooth devices. Exposure to this type of radiation from is not dangerous. Non-ionizing radiation does not have enough energy to separate electrons from atoms. Therefore, it doesn’t even pose a minor threat to your health.

Furthermore, the only recognized biological effect of non-ionizing radiation is a heating effect. If the radiofrequency energy was high enough, it may increase your risk of burn. However, it is unlikely that a hearing aid would ever get hot enough to cause even a localized temperature increase behind or in your ear.

Studies have also shown that Cell Phones create a significantly higher amount of non-ionizing radiation than hearing aids and it isn’t even close.

Studies into non-ionizing radiation from Bluetooth is still ongoing, but continues to show that it does not pose a health risk.

However, if you still feel that you are at risk for negative health effects from Bluetooth hearing aids, I highly suggest you also get rid of your cellphone, and any other electronic device you have in your presence, because they would pose a significantly higher risk than any Bluetooth hearing aid. 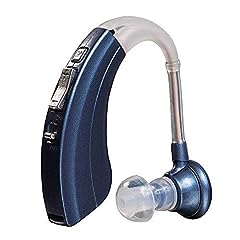 (2580)
Super Efficient Power Consumption 500+ hour Battery Life Adjustable for Either Ear High & Low Tone Control Modern Stylish Design and Ready to Wear (as of September 21, 2020 - More infoProduct prices and availability are accurate as of the date/time indicated and are subject to change. Any price and availability information displayed on [relevant Amazon Site(s), as applicable] at the time of purchase will apply to the purchase of this product.) 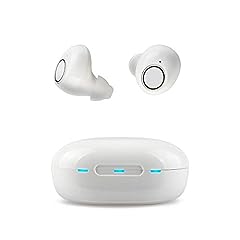 (95)
UPDATED VERSION: Designed for mild to moderate. This amplifier upgrade a better speaker, helps users to hear missed sound with maximum clarity. EASY TO OPERATE: A key switch to adjust volume and turn on/off. Short press for Volume, long press for tur... (as of September 21, 2020 - More infoProduct prices and availability are accurate as of the date/time indicated and are subject to change. Any price and availability information displayed on [relevant Amazon Site(s), as applicable] at the time of purchase will apply to the purchase of this product.) 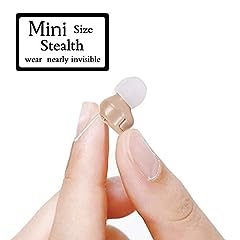 (952)
【Super Mini Size:】Machine size is 0.65 * 0.54 inches, which can be well hidden in your ears. Wire drawing can help you take out the machine. Tip: Please locate the earplug to fit the ear canal, otherwise it will cause noise.（We will come with three d... (as of September 21, 2020 - More infoProduct prices and availability are accurate as of the date/time indicated and are subject to change. Any price and availability information displayed on [relevant Amazon Site(s), as applicable] at the time of purchase will apply to the purchase of this product.) 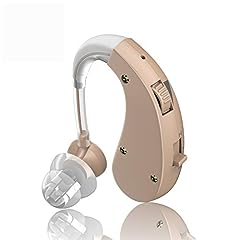 (115)
SUPER SOUND EXPERIENCE: With the fourth-generation digital chips, 50% more noise reduction than the third-generation. At the same time, it has two different frequency modes and four channel choices, you can adjust your settings according to different... (as of September 21, 2020 - More infoProduct prices and availability are accurate as of the date/time indicated and are subject to change. Any price and availability information displayed on [relevant Amazon Site(s), as applicable] at the time of purchase will apply to the purchase of this product.)

Maybe you can also cover whether they’re “secure”. Bluetooth low energy being available on virtually every computer and smartphone, opens up a lot of doors to hackers, which was previously not possible due to proprietary technologies like NFMI.

Will hearing aids ever be nuclear?

I would be concerned. I have an Accoustic Neuroma in my left ear and have no hearing. I have often thought about early generation cordless phones possibly being the cause. I would hate to lose my only good ear to emfs.

Cell phones have a lot more radiation but you only have them against your ear for short periods of time. Hearing aids are in your ear for 10 hours straight. 90 x 5 minutes vs .5 x 600 minutes equals 450 vs 300. Most people don’t hold phones next to head any more.

Thanks, Dr. Cliff! As a computer technician and an Extra Class HAM radio operator, I have tried to explain this to others. Some still like to worry, but your presentation is accurate and needed. Thanks!

This could also be used to show a benefit of using Bluetooth hearing aids versus holding a cell phone up to your ear at the higher strength of the phone. I have Bluetooth hearing aids and find the ability to stream phone conversations directly into my ears is a major improvement over holding a cell phone or conventional phone up to my ear. Keep up the great educational videos. I recommend your channel to everyone who shows any interest in hearing aids.

People are actually worried about this? Do they wear tin foil hats too? They’ve been under a rock if they haven’t been using bluetooth headphones or speakers.

Bluetooth should be a standard for all new/upcoming hearing aids and people should be requesting it. Props for the informative video.

Good to know. Thank you.

Thanks for all the videos. Do you know best device to working with headset all day( call center)